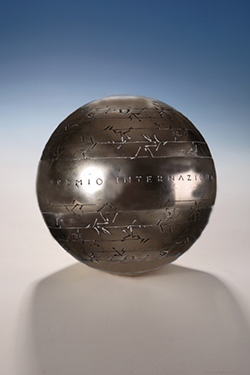 The ceremony was held under the auspices of the automobile concern Mercedes-Benz. According to the will of count Guido Chigi Saracini (a founder of  Accademia Chigiana in 1938) the prize is awarded  annually since 1982.  It’s being continued by Dr Rolf Becker, a sponsor and friend of Accademia.  In 2009 the carmaker Mercedes-Benz joined in the sponsorship of the prize in order to enhance a support for young, but already accomplished musicians, mainly pianists and violinists.  The laureates are selected by an international jury of music critics such as Henry Girardi (Corriere della Sera, Milan, Italy), Andrew Clements (The Guardian, London, England), Peter Hagmann (Neue Zurcher Zeitung, Zurich, Switzerland), Julia Spinola (Frankfurter Allgemeine Zeitung, Frankfurt/Main, Germany), and the artistic director of Accademia Chigiana, Aldo Bennici.

The prize is in a form of a silver sphere designed by Fritz König, a renowned contemporary sculptor, who is also an author of the monument at the World Trade Center in New York.