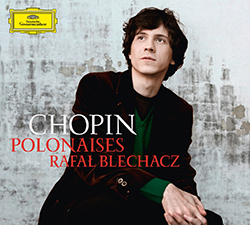 Rafal Blechacz reaches to the heart of the seven works in this programme, his expressive personality finding a compelling accord with Chopin’s own, says Geoffrey Norris.

Rafal Blechacz’s name is inextricably linked with Chopin’s, and that can certainly be no bad thing for a pianist. Blechacz, at the age of only 20, swept the board at the 2005 Chopin Competition in Warsaw, winning first prize and all sorts of special accolades, and proving himself to be so much in a league of his own that no second prize was awarded. He has already recorded the Chopin concertos and the complete preludes for Deutsche Grammophon, and this new disc of polonaises is, like them, of exceptional distinction.

If we think of Chopin’s polonaises as a multifaceted musical manifestation of the character of his native Poland – its pride, its spirit, its vulnerability, its sorrow – all those qualities are identified and brought into the potent interpretative mix of Blechacz’s performances. He has the requisite power to assert his presence, as Chopin so often does at the start of these pieces, but he also has the breadth of understanding to temper his tonal strength, depth and muscle with tenderness, lyrical warmth and a pianistic palette of both rich and delicate colours.

Take the particularly well-known A major Op 40 No1. Here Blechacz has complete command of the music’s swagger and healthy outlook, subtly maintaining the distinctive, propulsive polonaise rhythm in the bass and, with thoroughly natural inflections to the music’s pace, making the piece gleam with an exhilarating freshness.

Then in the contrasting C minor Op 40 No2, Blechacz conveys something much darker, more explosively passionate, more disturbingly restless. Blechacz reaches to the heart of the seven works in this programme, his expressive personality finding a compelling accord with Chopin’s own.

No one else but the young genius Rafał Blechacz! Upon winning the 2005 Chopin Competition in Warsaw, he proved to the world of classical music how mature pianist he is and how giant his artistic potential appears to be. Only every second year can Blechacz record for Deutsche Grammophon. His new disc shows how intently the artist can listen to the music of his fellow-countryman Frederick Chopin, how wisely finds his culminating points, how tenderly he indulges himself in these sounds and their amazing tone. By seeking the truth, Blechacz provides these sounds with a revolutionary spirit. Triumphant works are performed ecstatically, showing the breadth of understanding at the end. Excellent.

On his first recordings RafałBlechacz was already a mature and moderate at times despite his whole evident potential. Yet, in the meantime this amazingly modest Pole deserved to be called one of the best promising pianists of his generation. This interpretation of the great Polonaises appears to be an impressive evidence of an immaculate taste and a will to form. It also reveals a will of emotional pressure in tempo which was to Polonaises’ advantage. A very well-known Polonaise A-major was performed with such an impetuous spirit that even to a piano teacher having some doubts about this form he becomes really convincing. However, in the composition c-minor puls, where he paints almost Wagner harmonies and light transitions in the middle part, he becomes far gentler. Grand phrases are developed at ease. The middle section of Polonaise in f sharp minor with these almost maniac-like drums was presented in the Blechacz conception roughly and steadily, therefore, like from this wreckage world gradually rise these frail topic fragments, from which blooms a deep in thought dream about Mazurka, it is such a beautiful playing of Chopin music which overwhelms the drama sense and recalls memories.
(…) Each finger tip of this artist has so much more than just a talent than other Young pianists from the best recording companies altogether.

Rafał Blechacz, only 20-years old, enjoying popularity, a winner of the first award in the International Piano Chopin Competition in Warsaw in 2005, decided on the music of his compatriot – Polonaises in his fifth DG production. As usual he concentrated on seven great Parisian compositions rejecting five earlier Warsaw ones. However, his interpretation contribution seems to be something new and comes as a surprise: Blechacz plays Polonaises with amazing fiery energy, seeing them not as refined dances, but often as stylised phrases and slightly darkened emotions.

(…) Blechacz perfectly defends himself in this interpretation. In piano terms this new recording smoothly refers to his former recordings and continues an outstanding level. His play is clear, also allows for strong tempo swinging, every moment is absolutely well thought over. Worthwhile listening, truly original.

I must admit: if I had know that Rafał Blechacz, the first prize winner in the International Chopin Piano Competition in Warsaw in 2005, prepared his third Chopin album (following Preludes and two Concertos) and if I had had to take the risk of choosing the repertoire I would have bet on Nocturnes. Or perhaps on the second or third Sonata. Or even the selection of Mazurkas. I would have considered Polonaises the least likely. And so – as shows the CD released by the Deutsche Grammophon at the beginning of September – I would have been wrong.

Actually when you think about such compositions as the Polish “Heroic Polonaise” Op. 53 or “Military Polonaise” Op. 40, No 1, they are pretty naturally referred to epic texts, great, full of pathos and waves, to which authenticity was added by such grand piano titans as Rubinstein, Horowitz or Gilels. It is also true though that this kind of interpretation with so much charm, does not use up the range of possibilities.

In the essay about the elements of Chopin’s national music, a musicologist BohdanPociej identifies in Polonaises and Mazurkas – the forms directly connected with dance – the places of Chopin’s creative activity, where “the Polish accent” of Chopin appears very vividly: but while in Mazurkas usually prevail folk music styles, in Polonaises the background is composed of courts, castles and palaces of the gentry, in other words aristocracy. It is aristocracy that seems to me to be the key word so that to better understand and fully appreciate unusual effects achieved by Blechacz on this recoding.
Probably the main direct predecessor of the interpretation line along which Blechacz moves, consists of the same elements which were used by another grand piano genius of Chopin music: Adam Harasiewicz. We talk here about epic and pathos which will not be displayed straightforward, but subtly mentioned, not highlighted but filtered through detailed and intelligent analysis of the score. To my mind, Blechacz goes even further than Harasiewicz on two levels at least: the palette of tones which he displays in his piano play and the capacity of approach towards placing these compositions in the landscape of music history.

There are numerous examples here co we must confine ourselves to only a few. Let us take for instance the renown fragment of Polonaise Op. 53: undeniably Blechacz does not achieve “the clap of thunder” (…), on the other hand he succeeds in maintaining the play of harmonious slowdowns with impressive sharpness, which appear between the figuration of four notes and motives which spread under right hand in the meantime; or the renown Polonaise Op. 40, No 1 – full of characteristic triplets, which obviously in a totally different atmosphere – recall sarabandas or overtures in the French style of Bach: a composer who, not by accident, belongs to the young pianist’s favourite artists.

Other interpretation pearls can be found in Polonaise Op. 44: a noble and passionate initial motive, performed in such a way so that to fully present an authentic harmonious picture he is accompanied by, achieving an almost expressionist atmosphere of the following section or the slow interlude, where Blechacz develops so gorgeously, but also making a perfect impression, the dance rhythm, not allowing us to forget even for a moment that Chopin clearly tells about Mazurka character.

But perhaps we will find an authentic interpretation masterpiece in the closing Polonaise – Fantasy Op. 61. Blechacz himself expressed his weakness especially for this composition referring to it like to “metaphysical suffering poem”. And indeed Blechacz realizes here a sound draft about „going away”: we can understand it already from the introduction in which passages are played with beautiful diminuendo, having this going away effect which at the same time is an echo and memory. We can understand it through a constructional weight and the meaning with which pauses are made and which Chopin continues on the score pages (composing music with silence: isn’t that a domain of truly great musicians?). And first of all we can understand it through perfect phrasing which the pianist spreads over a uniquely complex structure, undertaking a slow section H-major with the choral beginning, but in the first place with an emotional elation, spirituality present in the entire composition.
To conclude: a recording which in my opinion can really open new horizons within reading such renowned compositions and in a sense so “tired” of fame. The more so it is worthwhile our attention because the means used by Blechacz, refer to the area of pure music, without any suggestions or strange references to what accounts for these wonderful scores. It is a CD which reveals another wonderful phase of the development of the great pianist who every time performs among the most interesting pianists of the young generation and at present the most interesting of all.

A superlative musician, a great Polish son of our times, RafałBlechacz, releases his new CD. This time it will be seven finest Chopin Polonaises.

(…) This time the artist displays seven finest Chopin Polonaises. In an attached book you can find the reasons for such a choice of compositions. You will find it pleasing indeed to read the comments and listen to these unique interpretations at a time, particularly the Polonaise in F-sharp minor, Op. 44. With this piece Chopin combined mazurka as a peculiar trio, which provides the pianist with a fantastic opportunity to present his artistic craft, especially when it is necessary to expose differences in the rhythm of Polonaise and Mazurka. Finally the pioneering Polonaise – Fantasy, Op. 61. Two most famous ones, A-major, Op. 40 and A-flat Major, Op. 53, played with astonishing precision and engagement. Blechacz appears to be equal to such outstanding performers as Rubinstein or Horowitz (…).

(…) when we insert a CD of the week – or any other recording by Blechacz – we can find the same pensive artist. An artist pondering over what to do with music and why. However, there is something more about RafałBlechacz. Something that makes the listener believe that one can be born just to play Chopin.

Joy, melancholy and pride of the motherland
(…) Polonaises performed by RafałBlechacz express joy, melancholy and pride of the motherland at a time whereas the CD combines all these moods and feelings to make a story about different chapters from Chopin’s life. One can find here two Polonaises, Op. 26, composed several years upon leaving by the composer his harshly experienced motherland, Polonaises, Op. 40, some of the best known as well as the late one, the grand Polonaise-fantasy, Op. 61, in which the composer lifted by the wings of inspiration, almost entirely resigns from the form so characteristic for this genre in contrasting, unconstrained and so much emotional passages.

RafałBlechacz has all it takes to tell a story about the particular stages of Chopin’s life: dark and light, tenderness and determination, moments of reflection, constant rhythms and swift passages. Things impossible to be taught by anyone but this thoughtful pianist.