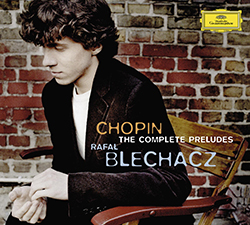 . . . the wait has been worthwhile. Blechacz . . . seeks the inner voice of the A minor and E minor preludes, drawing the listener beneath the glistening surface and towards a heart of unsuspected darkness. In the agitated 1st and 8th preludes, he is fast but never flash and in the cantabile 21st he is unaffectedly lyrical. There is something authentically Polish in his prudent, bucolic understatements . . . Blechacz plays two bonus Nocturnes of breathtakingly slow and soft audacity. This is a real artist in the making.

Blechacz is a superlative pianist but an even finer musician, and this is playing of exceptional clarity and expressive beauty. Everything Blechacz does seems natural and organic, and his ability to phrase Chopin's long lines with an inner sense of time and space is a constant joy. Blechacz brings an aristocratic refinement and elegance to the Preludes, in both the lyrical pieces (No. 4, 6 and 15) and those with swathes of notes (No. 3, 8 and 10) His classical approach is a pole apart . . . Blechacz's playing exudes subtlety and musical insight . . . Blechacz again reveals his expressive ease in the two Nocturnes Op. 62, where his blend of classical restraint and Romantic vulnerability is magical. The sound throughout is as vivid and natural as the playing.

. . . his performance of the Préludes is remarkably full-blooded, exploiting every ounce of sonority, with beautifully controlled pedalling, and there are some wonderful touches with sudden and ravishing changes of colour (in the Third Prélude particularly). What is most striking is the musical confidence of this young firebrand. Technical difficulties are clearly not an issue and even the most hesitant and tentative of the Préludes are delivered with an autocratic sureness of interpretation and of touch, with a strong resonant bass coupled with rich bel canto treble melodies.

„Exceptionally mature for his age”. Such remarks about him are made in the music world. Blechacz was twenty years old when he swept away his competitors in the international competition in 2005. Jurors such as John O’Conor claimed that he is one of the greatest pianists they had ever heard in their lives … genuine style, solemnity which is simply astounding. Not only for the young generation but also for our music world.

You just can’t get rid of Chopin play performer by this sincere poet. Subtle lyrics, legato of Blechacz are spreading a gentle melancholic charm so rarely and hardly anywhere observed in today’s mass media formed world of classics. His dark, full tone totally immerses in intense, sophisticated … spectrum of expression. Inside he finds … the way … to a fantastic Power of telling a music story … immaculate, excellent technical performance, melodious and meditative. Chopin music remains authentic … His recording belongs to the most valuable ones in recent years.

Modest beauty combines with enchanting precision. There is nothing uncertain, immature in Blechacz playing. You can already look forward to the subsequent CD.

Chopin music can be heard so often, but rarely with such an elegant precision connected with the style, technique, abundance of novelties and colours. There is poetry, artistry and reflection, each of the miniatures has its own character. Blechacz allows us to hear the entire nostalgic charm in this interpretation.

Chopin music played by this 22-year-old pianist is full of solemnity and youthfulness. It is also energetic, clear, original and emotional, characterized with a slightly funny character. A very individual recording debut, rich in details.

… Preludes sound perfectly under Blechacz’s finger tips. Passages in the final composition – Prelude 24, are played so brilliantly that we can feel as if we are lured and think back to the enchantment of reviewers after the Chopin debut in Paris …

Various deeply poetical pearls of his compatriot, incredibly professional play with a lot of intuition, joy and amazing awareness of architectonics.

For his young 22 year-old age, he offers a mature and convincing interpretation of the cycle, in terms of technique without any effort, a number of various phrases in the revolutionary collection of miniatures which he combines in one poetic unity. Blechacz is a subtle Chopin wizard …

It takes a lot of artistry to create one of all this. Blechacz refuses any glitter or false sentiment, but he plays so gently and subtly and creates contrasts with simply brilliant intuition through immersing in the heart of music and displaying another composition from the former one.

The debut of Rafał Blechacz in the Deutsche Grammophon is full of subtle wonders. Listen to Prelude B-major with its sudden middle section immersing in pianissimo or the late Prelude cis-minor, op. 45 with its profound unusual; subtleness … Impetuous, proportional explosion of power.

His play is extinguished by poetic freedom, honesty of immersing in the essence of miniatures into which life is gently brought. Despite countless recordings, there is a demand for artists who can transfer compositions to the present day, display music alive and are convincing in the recording studio. Blechacz is one of them …

The Pole, Rafał Blechacz won the first prize in the International Chopin Piano Competition in Warsaw in 2005. Since then he has developed astoundingly … since that time Blechacz has often impersonated the main role of the youngest successor of Chopin. He has conquered several continents, such an award is a great catapult which will allow him to go even further. Despite the fact that this young man still has his feet firmly on the ground, he has not forgotten about his roots, modesty … if you can carefully listen to his play, you will hear a huge talent in the way he carefully considers the sound … there is something dignified about his play, almost terrifying precision of narration. Rafał Blechacz is not in any tact a provider of sentimental poetry. There is rather a great brightness, beautiful clarity as if a computed tomography scan surrounded music speedily and checked its architecture and internal structures … Hardly any pianist can go through semiquavers so masterly as Blechacz can in the left hand Chopin Prelude in G-major … Blechacz performs it in piano. Still another time you have an impression that such a Young pianist can understand the deepest mysteries. He modulates melody in the middle section in the gloomy part of Rain Prelude which is presented so organically and in an unaffected way. It is a grand piano play of worldly class. From repeated As in the final part of Prelude As-major, he makes a gong out of this world thanks to calm lyrics a listener wonders why nobody except Blechacz has ever played so beautifully and in a spiritual manner.

His play reflects his internal life, solemnity, a desire to indulge in every interpretational detail of Chopin compositions. Rafał Blechacz is far from sentimentality, trumpery and cheap affection. His Preludes are worth your attention thanks to their coherence and the quality of melody … Prelude 24 is marvellous … Bravo! Rafał Blechacz has undoubtedly a gift which should carefully observed in the future.