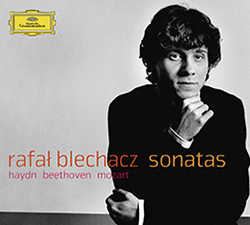 . . . the results confirm Blechacz as one of the most finely honed pianists of his generation. What is most immediately striking is the crisp buoyancy of Blechacz's articulation, reinforced by the upfront clarity of the recorded sound, which has a characteristic 'ping' that suits much of the music. The DG engineers avoid any hint of soft-focus glow . . . The playing itself is full of flair and charm . . . his playing sparkles with wit and character. With brisk tempos he conveys both serious intent and huge enjoyment, giving the music shape and driving momentum . . . The Mozart brims with "joie de vivre", displaying a classical poise and subtlety of expressive range. And Blechacz also revels in Beethoven's exuberant A major Sonata . . . for the moment this is a young man's view of a young man's music. Do hear him.

He plunges into the first movement with an almost explosive ferocity and thrust. Yet the playing never seems frantic. With exceptionally clean, crisp articulation, the movement's boldness emerges with an etched clarity in which every line, no matter how rapidly articulated, is clearly focused, dynamic contrasts sharply (but not excessively) drawn and surprises never underplayed. The ensuing Adagio (on a par with the finest slow movements in Haydn's quartets) is a prime example of Beethoven before Beethoven in its almost suspended stasis. The concluding Presto, if tossed off more rapidly than I have ever heard, never sounds blurred in the process, Blechacz's care with voicing clarifying the movement's witty dissonances. The account of the Beethoven sonata is every bit as good. In its aggressive thrust, Blechacz's way with the first movement recalls the magnificent 1933 Schnabel recording: witty, forward pressing and tautly organized. The Largo that follows I projected with an aptly staccato beat. As is in the slow movement of the Haydn sonata, the slow tempo never seems excessive, exceptionally clear voicing being a virtue . . . he offers a gorgeous slow movement and a deliciously playful finale, crisply articulated, with the music's humorous undercurrent fully conveyed. In all three works, Blechacz observes exposition repeats. Throughout, the sound is state-of-the-art: closely microphoned, accurate in timbre, it places the piano squarely in one's listening room.

. . . Blechacz's reading of the A Major Sonata is . . . compelling and remarkably mature. The pace is quick, the pedaling is judicious, and his use of rubato is subtle, tasteful, and employed only at harmonically or formally critical junctures . . . Blechacz wisely harnesses his knack for color distinctions to highlight structural points and to underline dynamic and textural contrasts . . . Blechacz's tempos . . . seem unforced and organic, and certainly not indicative of overt exhibitionism.

His gifts are many, and often phenomenal; he is a pianist of great range, and the kind of refinement that used to be called aristocratic; a stunning virtuoso whose virtuosity is always placed solely at the service of music; he is indeed an exemplary musician and an artist to his remarkable fingertips.

His Chopin CD debut confirmed his class. The Pole displays an outstanding sense of classical style: Haydn No. 52, Beethoven Op. 2, No. 2 and Mozart KV 311. Those who expect to hear Viennese classical composers in quintessence won’t be disappointed.

During the Chopin Competition Rafał Blechacz showed an energetic-joyful and brief etude Op. 10, No. 8 F-major, transforming in a much more mature and rich way than his competitors who performed before or after him, the piano sounds into the colours of ringing bells. The first award won by Blechacz in the competition was a pure sensation … On his last year’s debut album he revealed as … a Chopin specialist … with a perfect technique, such a wonderful tap in various nuances, great clarity and to an extent a classical sense of forming, thus gaining the sympathy and recognition of reviewers … An intellectual interpretation of Haydn sonata turned out to be a great success, when Blechacz in the Adagio part adds dignity, fills with silence as if he didn’t play the Steinway, but a historical piano … Here … the musician performs and he is on a good way to develop his career.

… Blechacz displays a music postcard from Vienna with the early Beethoven, the middle Mozart and the late Haydn. Consistently and spiritually he follows the essence of sonata, vividly presents the structural sound plans, is inspired by motivational work … The full range of sounds and originality of Blechacz entrance every time.

His interpretations are characterized by a nearly model clarity and accuracy: Blechacz doesn’t hide anything, does not need to pretend to be submissive to cover up manual imperfections. Instead he presents highly responsible, well-considered experience of the note score who comprehends as literally as it gets.

Haydn’s Es-major sonata is played so vigorously and attractively and with so much tension that you can observe the irritability of the pianist. Likewise, Beethoven’s A-major piano sonata, Op. 2, No. 2 sounds so powerful, cheerful and clear …

The fact that this 23-year old pianist can’t be just classified as a Chopin music specialist can be confirmed by the worthwhile recording of the three Viennese classical composers. In the early piano sonata A-major, Op. 2, No. 2 by Ludwig van Beethoven, Blechacz proves to be an incredibly energetic interpreter who does not forget about Chopin playing subtleness though. In the largo he leads the pianissimo passages to a wonderfully calm brightness; the slow part of Haydn’s late sonata Es-major, Hob. XVI: 52 confronts with expressive experiencing of sounds, contrasting with a rhythmic and amazingly emphatic finale. In sonata D-major, KV 3111, Blechacz sustains Mozart’s smart style keeping a continuous tempo in side sequences and irresistible andante successfully combining a wide range of colours with astounding clarity.

… his interpretations are characterized by a nearly model clarity and accuracy: Blechacz doesn’t hide anything, does not need to pretend to be submissive to cover up manual imperfections (…)

RafałBlechacz displayed a masterful playing just like Rubinstein style. The new CD reveals another aspect of personality of the young pianist who has beautiful music as well as technical resources. A gentle piano sound makes a profound impression and does not touch the ground whereas architecture remains undisturbed – the last part of Haydn’s piano sonata proves an exact effect. Transience and simplicity of the sound are characteristic for Mozart, Piano Sonata, D-major in which con spirit and con espressione characters are very well emphasized. Beethoven Piano Sonata No. 2 reveals the pianist’s maturity due to its liveliness and cohesion.